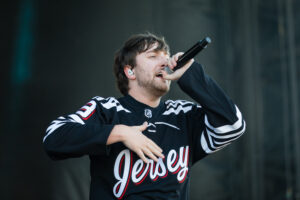 On Sunday at Riot Fest, I had the pleasure of talking with artist and fellow Twenty One Pilots fan, Reece Young! We talked about his upcoming EPs, collabs, beginnings in hockey, and more!

Noelle Matonis: How was your performance today? How did you feel about it?

Reece Young: It was fun. I’m sweaty still. I haven’t cooled down.

NM: Yeah, it seems like it’s hotter today than the last two days.

NM: So how does Riot Fest feel different than other venues you’ve played in the past?

RY: This is the first major festival I’ve done. So this is a whole lot different. It was really cool; it was like a checklist/bucket list item.

NM: Yeah definitely! Well that’s awesome! So what first got you into music or playing music? Is it always something that you wanted to do?

RY: No, actually, I thought I was gonna be a hockey player for a very long time.

RY: I grew up playing hockey, and then it was like my senior year of high school and I was like, I think I wanna do music. And I went to college for it and learned how to write songs and now we’re here.

NM: That’s so cool! Yeah, you don’t always end up doing what you think you’re gonna do, so that’s interesting! So what bands do you like to listen to when you’re on the road touring?

NM: I love them! They’re my favorite band.

RY: Bring Me The Horizon’s also my favorite.

NM: Another one of my favorites.

RY: Yeah those are my two favorite bands.

NM: Yeah. I feel like I can hear their influence in your songs.

NM: Yeah. I love that! And I was wondering do you write all the lyrics for your songs or is there anyone else helping you out like band members?

RY: Yep! I write most of it, and then sometimes…I like to collab a lot with other artists.

NM: Yeah, I noticed that. You have a lot of collabs.

RY: Yeah! So that’s the goal–to keep meeting cool people, keep writing cool songs. But yeah I do pretty much write it all.

NM: That’s awesome! And you mentioned you have a lot of collabs, so I know you collaborated with Jayden Panesso from Sylar, and the Korn drummer, Ray. So how was that? Like how did that come about?

RY: So, I had a mutual friend who knew Jayden, and he just connected us, and I was like I have this song I think you would sound really cool on, and he was like, “Okay!” And I gave him a couple hundred bucks, and I’ll do it for sure.

NM: That’s awesome how that worked out. Are there any particular bands or artists that you would like to collaborate with in the future?

RY: Bring Me The Horizon…

RY: …And then Twenty One Pilots. [both laugh] They’re so cool!

NM: Definitely! That’s what I expected.

RY: Yeah! Those two would be crazy!

NM: Yeah, it would! So a lot of your songs are about dealing with anxiety and mental health issues, so what message do you hope to get across with your songs?

RY: I want people to listen to them and feel like there’s somebody out there that is going through what I’m going through. ‘Cause when I was at that lowest point, I wanted somebody that knew what was going on.

RY: I didn’t have a lot of that–a lot of support at the time–and I put music on once, It was Vessel stuff–and I was like, I understand those lyrics now. And I want people to hear my stuff and be like, that kid gets it. He understands. I want people to be able to feel safe, and like, understand what’s up.

NM: Right. And I think that’s a really good message, and it really can help people out when they know that they’re not alone.

NM: Do you plan on releasing a full length album any time soon?

RY: That’s definitely a dream of mine. My EP is out next month, and then another one.

RY: So after that, hopefully.

RY: Elevated by State Champs. They’re one of my favorite bands too.

Mark your calendars for Reece Young’s next single, “Pressure” ft. PALISADES out this Friday Sept. 23! And in the meantime, check out his music on Spotify, Apple Music, Soundcloud, Youtube, and Amazon Music!