How much do streaming services pay bands?

December 2, 2022 noelle News, Uncategorized Comments Off on How much do streaming services pay bands?

How much do music-streaming services like Spotify and Apple Music actually pay artists? 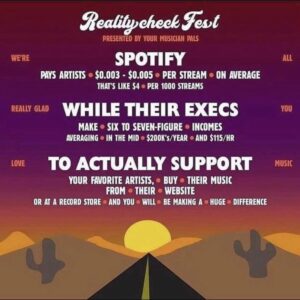 With intro by Noelle Matonis

This time of year, with many people posting and sharing their Spotify Wrapped on social media, (stats of their most streamed artists, songs, etc.), many artists and musicians are spreading the word that Spotify and other music- streaming services do not actually pay them a living wage, especially for smaller bands and artists.

Jawbreaker is among the many bands who are taking a stand against music-streaming services like Spotify when it comes to revenue. They recommend listening on their bandcamp page or purchasing physical copies from music stores or their website. The image is a twist on a promotional tactic Spotify used where users can create a fake festival lineup made up of their favorite artists.

To get the most up-to-date data on this topic, I conducted a survey to see what bands and artists had to say about how streaming services affect their revenue. See the results here.

One of our guest writers, Sofija, did some research as well.

According to the New York Times, 83% of recorded music revenue is generated through streaming services, yet, we wonder how much our listens account for in artists’ paychecks. Typically, they accumulate less than a living wage.

Bands and musicians make most of their money at gigs, according to bandtheme.com, but many have suffered income losses due to the pandemic preventing concerts for over a year. With online performances, many musicians did not have ways of marketing their performance for money, and hence, royalties from streaming services persist.

Even immensely popular bands such as U2 and Metallica make most of their earnings from tours, and only a fraction is squeezed from streaming. According to Business Insider, only 4% of U2’s income (the largest grossing musical act in 2017) came from streaming, whereas 52 million dollars were earned through touring. Streaming services are not considerable money earners for  star musicians, and those local bands trying to make their start are not about to experience a financial boom for those twenty listeners on their first single.

Spotify’s terms and conditions state it will not generate any money directly from artists’ music.

“Spotify does not claim any ownership rights in the User Content you post to Spotify for Artists,” says the streaming services terms and conditions. There are no fees to post User Content, nor are deals offered based upon the artist. Although it claims monetary gains belong to the rights holders for the music, no mention of payment is anywhere promised in the agreement.

Though hazy in its promises to pay artists for their music, Spotify is the most popular streaming service in the world, with 350 million users, according to CNN. The service amassed more revenue in 2021 than it had in all the combined previous years of its existence, according to Loudersound.com. Spotify’s rate does not pay artists directly, but the music’s rights holders, who themselves distribute the earnings after Spotify takes their own share.

SoundCloud’s streaming agreement is far more clear in its conditions and its promise to artists’ rights.

“You receive a pro rata share of 55% of net revenue,” states SoundCloud’s terms of agreement. “You are paid for each calendar month within 45 days of the end of that month, regardless of how much you earn.”

“Your money goes to the exact artists you listen to,” says Soundcloud’s website.

However, to receive “fan-powered royalties,” an artist must subscribe to Next Pro. The only free option on Next Pro limits track uploads to three hours, and the paid subscriptions range from $2.50 to $8 and up. Hypothetically, if an artist had less than three hours uploaded on the free Next Pro service, they could make profit for every listen. However, if they want to upload more music, and they do not receive enough streams to cover the subscription bill, the artist has to pick up the tab.

According to the New York Times, the money machine works like this: all revenue from subscribers or ads is held in one “pot,” regardless of who listened to what and when, and this said “pot” is then divided by total number streams for the entire month. One artist receiving 10% of all streams for one month means 10% earned for that artist. One artist receiving 0.000000000000001% of all listens for that month earns 0.000000000000001% of Spotify’s monthly intake. Hence, many artists feel this machine favors trending or popular artists and leaves niche ones in the dust.

The system has another major flaw. Song length and time listened have no traction here. A 17-minute masterpiece equals a three-minute pop hit under this system. The only thing that counts is listens-to-artist ratio. Hypothetically then, assuming each fan runs through each track on an album the same number of times, album A of 60 one-minute songs can gain more percentage points in Spotify’s “pot” than the five twelve-minute songs on album B. For aspiring artists on Spotify, the hopes of breaking big lie in either achieving massive popularity cranking out songs fans are willing to submit themselves to on repeat, or hoping Spotify attains more subscription funds through price hikes, advertisements, or otherwise. But for those with trust in the dedication of their cult fanbases, there is Tidal.

The lesser known streaming service, Tidal, pays artists directly using funds from subscribers to its “Hi-Fi Plus Tier,” where subscribers’ highest listened artist of the month receives all of your subscription funds, according to Loudersound.com. Tidal provides the number of listens comparative to your most listened artist in case subscribers feel sympathy for other bands. This subscription, however, costs just $2, according to Tidal’s website.

By no means does Tidal’s direct payment provide a salary for musicians based on streaming alone. Assuming a constant number one position on listeners accounts, small-time acts have no hope of subsisting on Tidal for wages.

America’s average rent is $1,326, according to wordpopulationreview.com, while the UK’s London average is $1017.45 in US dollars, according to spareroom.co.uk. Averaging these to $1171.73, Tidal’s monthly $2 contribution won’t mean much split between the average four band members, assuming each lives in a separate apartment, unless you are one of 2,343 or so superfans hoping to help their favorite American or London artist make rent.

Apple music averages their payments to rights holders to one cent per listen. With 468,692 listens, they too can afford the same rent–that is, if the band themselves are the sole rights owners and are not under obligation to pay off major label companies, producers, etcetera.

According to Pitchfork, Last year, the Union of Musicians and Allied Workers (UMAW) organized protests at Spotify offices around the world. UMAW’s “Justice at Spotify” campaign was launched in reaction to the economic hardship of the pandemic, as Spotify’s company value has tripled, while payouts to artists haven’t changed. Musicians want a penny per stream payout format, but Spotify’s director of economics argued such a model would not provide the company revenue from less-popular artists.

It is no surprise then, that artists typically make most of their earnings from physical copies, merch, or gigs.

Bands and Musicians: Making Money from Music in 2022

How do musicians make money

Which music streaming service pays artists the most?