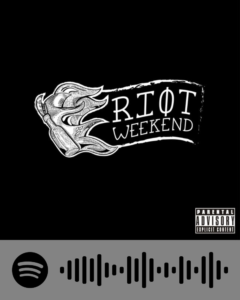 RiotWeekend , a fairly new pop-punk band from Guildford, Surrey in the UK, have released their self-titled debut album today! Recently, they’ve released their first single off the EP, “Never Again”. I’ll be reviewing the EP track-by-track.

This song starts out with a grungy melancholy 80’s-sounding guitar, then the feedback transitions into ripping guitars reminiscent of The Used and Pencey Prep. Then, unexpectedly, Holly Nunn’s ethereal, mysterious, melodic vocals come in. Her soothing voice contrasts with heavy guitars and drums, yet they compliment each other nicely. If you enjoy grunge, punk, post-hardcore and emo influences, then you will definitely like this song.

This is one of those songs that as soon as it starts, you know it’s going to be a banger. The guitar is energetic and exciting throughout the whole song. The vocals remind me a little of Hayley Williams from Paramore, however, lack some punch in my opinion. This is definitely an angry song, which you can hear in the music and the lyrics, and I just wish the vocals had more of that emotion. The bridge gets heavier, which I Iove. The chorus is anthemic and makes you want to headbang and/or jump around, so I think this would be a great song live. I thought Drip Feed would be my favorite song on the EP, but then I listened to this one and I think I might like it more.

This song starts out with a definite early 2000’s “Skater boi” by Avril Lavigne vibe. Personally, I feel the bridge and ending is a little meh. It takes me back to bridges that were common in early 2000’s pop-punk. It just kind of gets higher and then ends pretty predictably. If it was intentionally made to have this nostalgic sound, then they got it spot-on. It just wasn’t clear enough to me whether it was intentional or not, so I feel like they could’ve either made it more obvious or taken more risks, rather than just copying the style of this kind of music.

This gives me a bit of a party song vibe. It builds as it begins, and then goes into a catchy chant. Again, I think the vocals are technically great, however, they just lack a certain punch or emotion that the music envokes. However, I think this is a good closing song, because it’s fun and dancy and has closure as it fades at the end.

Overall, I think this is a good first EP, and I especially like the first two songs, “Drip Feed” and “Fine”. They are both punky, energetic, and make me want to move. I think the vocals work the best in the first song, because they act as a good contrast to the heavier guitars and drums. However, in the rest of the songs, I feel like the vocals don’t match the same energy and emotion that the music envokes. It just needs a little more oomph. I think RiotWeekend has a lot of potential, and this was a good first start. I hope to hear more from them as they evolve as a band.

You can listen to the RiotWeekend EP here.

You can find RiotWeekend on: